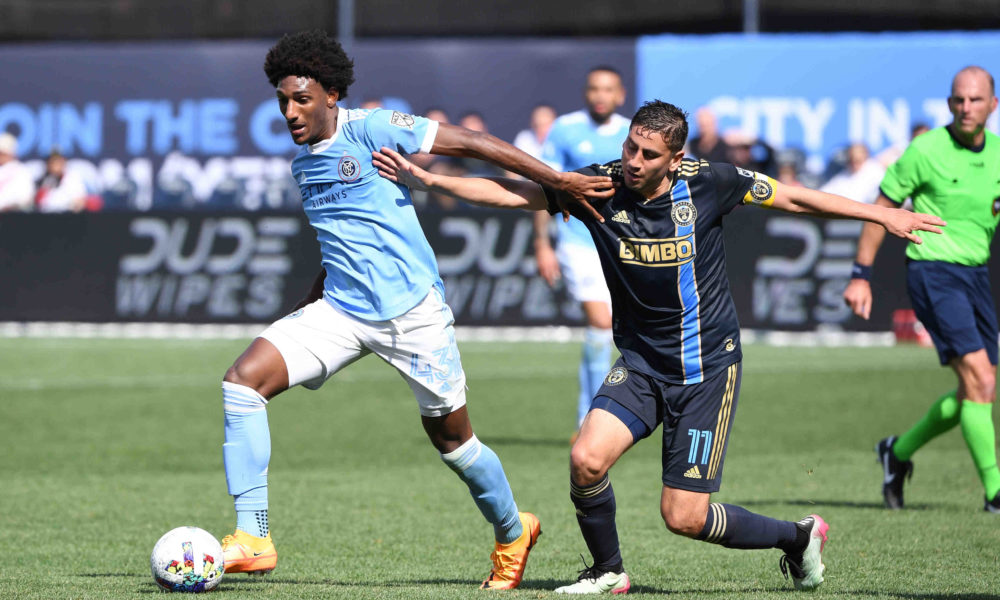 Bronx, New York- On Saturday afternoon, NYCFC fell to their Eastern Conference rival Philadelphia Union, 0-2 at Yankee Stadium. Goals by midfielder Alejandro Bedoya and #6 Dániel Gazdag led the Union to the win over their MLS rivals. The match became chippy in the second half as an altercation occurred between Union goalkeeper Andre Blake and multiple opponents. This is exactly what soccer fans would have thought would happen when these two teams faced off each time.

This was the first matchup between the two since their Eastern Conference Finals match in December of 2021. In that match, which featured, a sold-out crowd in Philadelphia, NYCFC defeated the Union 2-1, advancing to the MLS Championship. One of the two goals for NYCFC in the Eastern Conference Final was scored by midfielder Maxi Moralez. The Boys in Blue went on to win the MLS Championship for the first time in franchise history.

In Saturday’s road win, the Union showed their versatility throughout the match with a key performance from goalkeeper, Andre Blake. He totaled the day with two saves. Blake finished as the runner-up for MLS Goalkeeper of the Year in 2021.

NYCFC had several situations to cash in on goals. They led the time of possession 73% compared to the Unions 27%. However, The Boys in Blue were unable to convert these possessions into scores successfully. Another important statistic is that NYCFC had 18 shots on the day. Philly finished with 13.

NYCFC Head Coach Ronny Delia shed light on the loss: “I think the positive was the fight. That we never gave up and we took the game into their half. We answered at the break because the first half we were sleeping in the most important situations and today we put it in their half in the second half and that shows character when you think of all we’ve been through.”

Delia explained the team’s performance: “I think if we get that we get a lot of energy but we could never open them up enough and that was not good enough. At the same time, we can play in this shape, I think it was positive.” In the MLS Eastern Conference standings, NYCFC currently stands in 10th place with 4 points (1-1-2). “ I think to see that we can be so dangerous and can press from the front it gives us more options to play in different ways in different games.”

NYCFC is going through a straining week of travel and strong competition. They are coming off a Concacaf Champions League match which took place in Guatemala this past Tuesday, March 15th. Travel and constant play have caught up to the team. NYCFC has a 13 day break coming up. They look to rest up and ease themselves in for a strong return.

Team Captain, goalkeeper Sean Johnson stated “Between preseason, Champions League, the start of the league, there’s a lot of miles traveled, a lot of miles on the legs, and mentally being away. He added, “We don’t look for excuses, but naturally, this comes at a good time that we have some time off for everybody to regroup, and refocus, and recharge because we have a long stretch after the break as well.” Johnson finished Saturday’s match with two saves.

NYCFC will go on the road to battle Toronto at BMO Field on Saturday, April 2nd. In their last three matchups dating back to 2020, NYCFC is 1-2-0 against Toronto. The team looks to get back to being fully rested and healthy coming out of the break.